Dear Friends,
I have a small confession. I'm going away this weekend on a knitting retreat. My Tuesday morning knitting group is going up to northern Minnesota (way up north, past Grand Marais) for a long weekend of knitting, eating, relaxing etc. They are a wonderful group of women, the core of which started together at the shop during an Einstein Coat class. They then moved on to a Fair Isle Jazz scarf class. That's when I hijacked them and we started our little Tuesday morning group. People have come and gone from the group, but for the most part the core has remained the same and we have settled in to a comfortable friendship that means the world to me.
Here's where the confession part comes in - none of these women are bloggers! I don't think they know what blogs are or that I have a knit blog or that they would care. But, I love them all anyway. I feel like I'm cheating on you all by consorting with known non-bloggers.
I'll report back next week but on the off chance this blog should go dark, Amy was the last to see me before I went off into the woods with non-blogging-knitters. Wish me luck.
Posted by Deb at 11:49 AM

Sunday was my birthday, my 49th birthday. Based on the comments I've received, you'd think this was the end of me. I seem to remember this with each of the decade birthdays. People start with the age comments the year before so that by the time you hit the big "X0" it's so anti-climactic that you've forgotten all about it. So get them in now because by this time next year, I really won't give a damn.

You'd think a person gone for two month's would have lot more to discuss but I really don't so I'll answer Amy's meme (still don't know what that means) looking for five (only five?) personal idiosyncrasies.

1. I absolutely must fold my bath towels in the exact same manner all the time. Take them the long way and fold them in thirds; then in thirds again so that no edges are showing. Then they get put in the linen closet so that the smooth folded edge is facing out.

2. I have never eaten margarine and further it is not allowed in my house. Same with Miracle Whip. I'm a butter and mayonnaise (Hellmans) girl.

3. I cannot sleep on my back for fear that if I do my hands will naturally fall into a position that might look like a person in a coffin and I think that would be too weird.

4. I have to make my bed every day. Even if I just throw the covers up in a hurry and toss the pillows on in a haphazard way and even if I make the bed moments before I climb into it at the end of the day, some effort must be made every day toward making the bed. If I've been sick and in bed all day, I'll get up at some point, make the bed and get back in. 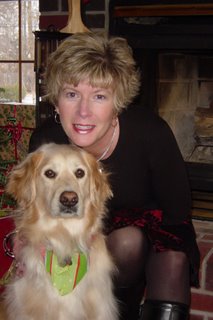 Holli, my very real and wonderful Golden, and I hope everyone had a wonderful holiday season. We're going to try to post more often this year but.....we're getting old and everything.

One last thing, Tigger is rolling all over the place hoping you'll stop by and wish Jeanne a Happy Birthday if you haven't done so already!! It's just his way. 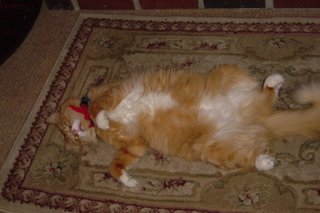