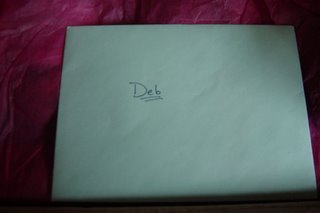 I've never really liked swaps. I've never joined a Secret Pal thing or a swap before. I was the kid in school or a work who got the bad Secret Santa. I was reluctant even to join the KnitFlix swap. But I felt compelled because, hell, I work in a yarn store so that part would be easy. Then I draw a swap partner who is an independent film producer. DOH - strike one for me!!

My package arrived yesterday - see it says "Deb" - which means I don't have to share it! 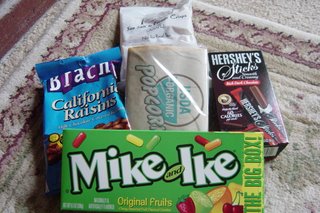 Treats!! Hidden under the popcorn are Sea Salt and cracked Pepper Pretzels! Yum or what? 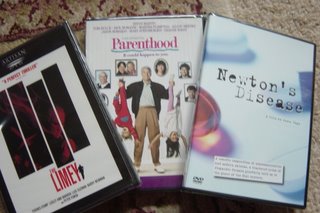 Flix: "The Limey" recommended by my swap partner because she new I liked the non-linear style of "Pulp Fiction", "Parenthood" because she knew that Jon is currently collecting Steve Martin movies and this is one I happen to love and that he doesn't have, and "Newton's Disease", the movie my swap partner produced! How cool is that!! Here is the City Pages review! 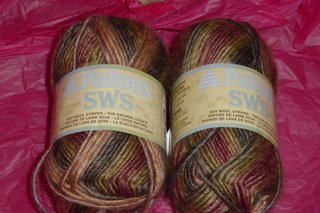 And then the dessert. Some yummy Patons Soy Wool Strips which perfectly matches the colors of my family room so I already have a throw pillow planned. Perhaps crocheted, perhaps entrelac. Can't decide. Don't have to right now.

Since I was an idiot and didn't take pictures of my package before I sent it off to Carrie, would you all be so kind as to visit her site and take a peek. Did I mention that she managed to fit this swap in in the midst of her marriage and the Twin Cities World Premiere of her movie.

Thank you Carrie for making my first swap a great one. And good luck with Newton's Disease.
Posted by Deb at 8:32 AM